A Spoonful of Smile

Ravikant Shukla is watching his father, Mr. Shukla, dress up in an exquisite kurta pyjama, when Mr. Shukla decides to take him along to the place he’s heading to. “Get dressed. Don’t you want good food? Madhu, take out his kurta pyjama.” It’s the first party that Mr. Shukla has decided to take his clumsy child to. “Today, I will teach you some public eating etiquette, something your mother doesn’t know.” Shuklas are a patriarchal household. Mr. Shukla, a professor of English at the Government College in Bhagalpur, was married to a village girl Madhu after her family offered a huge dowry. Madhu, being just a high school passout, has never quite gotten the respect that she deserved from her scholar husband. The discrimination has been evident to the nine-year-old Ravikant since sense came into his head, and he hates it but has never dared to raise voice against his father. He whispers, “Can’t we take Ma along?” Mr. Shukla ignores the question.

While dressing Ravikant up, Madhu calms him down and jokingly asks him to bring something for her to eat from the party. Once groomed, he proceeds along with his father waving a goodbye to his deserted mother. While Mr. Shukla joins his friends at the party, Ravikant goes on to accomplish his life’s greatest mission — to fulfill his mother's great wish. He scans the items on the dinner table - which is embellished with sumptuous daal, fragrant veg pulao, spicy paneer curry, tempting gobhi masala, and steaming hot pooris. Fearing a rebuke from his strict father for stealing food from the venue, Ravikant figures that to fulfill his mother's wish, he needs to act really smart and sneak things out without letting anyone know. He dismisses the idea of carrying items in the plates, as they would be inadvertently seen by everyone else. He contemplates carrying pulao in his small fists, but figures that would be ludicrous as pulao is almost tasteless when eaten alone, plus the chances of being caught and chided by Mr. Shukla would be raised as it’s pretty conspicuous. He tries and tests every other possibility only to encounter no solution, no great idea, and utter disappointment. Soon Mr. Shukla calls for him and he joins him for dinner. Dinner is served — scrumptious, aromatic, and delightful food in grand bone china plates. “You could eat as much as you want, but with a spoon that you hold like this. Only unsophisticated people eat with their hands,” his father instructs. Ravikant doesn’t really listen; his mind is elsewhere, racing to find that one great idea with which he could make his mother happy. He looks at a faraway stall, which is serving something he's never seen before in Bhagalpur. How could he have missed it? He finishes his dinner in a hurry, eating with hand irrespective of what his father had said, dirtying his entire palm. Before his annoyed father could rebuke him, he excuses himself on the pretext of toilet.

Half an hour later, Ravikant reaches home, running frantically ten meters ahead of his father. It alarms his mother. “What’s wrong with you?” she asks. “Get me a bowl, get me a bowl,” Ravikant screams, panting. Madhu Shukla, confused, looks at her peeved husband and is slightly unsettled expecting an impending outburst, but the excitement on Ravikant’s face evaporates her worry. At least for the time being. She goes to the kitchen and gets a bowl. Ravikant directs her to place it in front of him, asks her to shut her eyes and takes out fistfuls of McCain French fries hidden in his tiny kurta’s pocket and pours them to the brim of the bowl. “For you, Ma,” he says, as his mother opens her eyes. They well up with tears and a sweet smile surfaces on her face as she caresses Ravikant's head with love. They both grab hold of a fry each, and crunch them with delight. The intrigued Mr. Shukla steps ahead to see what the bowl contains. “Ah, you sneaked these from the wedding for your mother. Sweet act, my son. Madhu, these are McCain’s French Fries. They are the best ever, you won’t know, very famous among sophisticated people. I often have them in my college, can be made in just three minutes,” Mr. Shukla says with pride and reaches out to grab one.

Ravikant slaps the back of his father’s hand, halting him and says, “Don't eat with hand. Sophisticated people eat with a spoon.”

(Inspired from a real life incident. Written for Indiblogger's contest for McCain India.)

I enjoyed reading your blog. Thank you for publishing it.
Builders and developers Ranchi

I really like and appreciate your post.Thanks Again. Keep writing. 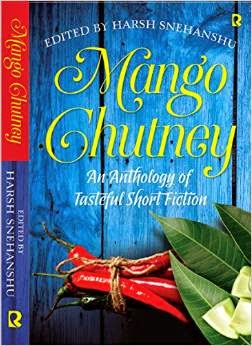 An Anthology of Short Fiction